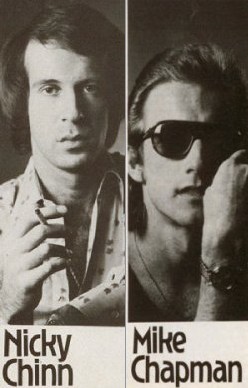 – interviewed in 1974 by Nigel Thomas

Nowadays there’s a small group of people who seem to have been handed a season ticket for that Golden Three enclosure. The Sweet. Slade, Suzi Quatro, Mud and even the unutterable Alvin Stardust sail gently into the money-spinning places with little competition except from among themselves and from the occasional freakish refugee from the musical deserts of Opportunity Knocks and the Eurovision Song Contest. For all their differences, what they have in common is a style which is aimed directly at the target. flighted with professional care and thrown with glittering accuracy. The people who make and buy albums look with unconcealed scorn on the efforts of these bands, a scorn which is often tinged with jealousy as ‘serious’ musicians see the ‘nouveau rockers grow richer’ worthy colleagues grow poorer. Of course there is no comparison between the success of’ these chantbound popsters and that attained by the supergroups. Bands like Led Zeppelin, ELP, Deep Purple. Pink Floyd and The Who stand head and shoulders above the Sweet. in earning power as well as musically.

However it would be silly to ignore the skill required to dominate the Radio playlists. Whereas there may be only two country-rock albums released in any one week to compete against each other. there are literally hordes of singles uncaged every day. and they’re all intended to smash their way to the top of the Fifty and thereby earn their begetters money fame and a higher asking price for the next round of the Pap-race.

Even ignoring those tracks which are taken off albums and slapped onto the smaller disc in the hope of a bit of broadcasting publicity for the LP, there are still sackfuls which have been made with the single intention of hitting the top, spots. Some people are much much better at it than the others and their skill is to be respected and admired. It is very rare indeed. But is it Art?.

The two people who do it best in Britain are called Nicky Chinn and Mike Chapman and they never appear on Top Of The Pops. are rarely seen in sequined trousers and glitter make-up and never sing their own material. Yet only one of their efforts has failed to make the grade. They’re songwriters whose speciality is the hit single, presented with the razzamatazz and showmanship which ensures that they get the first hearing. After that the production tricks and their heavy derived hooks will grasp the attention and work a way into your brain.

Smartly dressed. with neatly coiffed hair, they look like a couple of whizz-kid businessmen who’re ‘likely to strip your assets. all the while smiling charmingly. They even sound like it sometimes. complaining about the insupportable burden of taxes from the sanctuary of a smart Mayfair flat. “We’re virtually employed by the Government. We’re the only civil servants who write songs. They’re killing incentive. We’re thinking of moving.”

But the mood doesn’t last long. they’re soon back with their three abiding interests, their present success. plans for extending it into the future, and the unreasonable attitudes of the critics who accuse them of turning out mechanical music with about as much individuality as a fish-finger. They’re very defensive about the worth of their songs.

We’re back to respect. a long standing problem for many successful people at the commercial end of the market. It’s certainly been so for Sweet who are making a heavily publicised bid for the approval of critics and severing their links with Chinn and Chapman. though not to the extent that they are risking anyone else’s compositions on their singles. However, with Mud still charting up commercial victory. and Suzi Quatro looking a good fancy as a bigger star than either Sweet or Mud, the Chinn and Chapman partnership. in the best traditions of the American songwriting partnerships. looks set fair to continue under it`sown steam.

They’ve given up the management of the Sweet. saying that it was because they couldn’t do it as well as it should be done. for people who have only been in business for two or three years. they’re very keen on professionalism, however management does figure in their plans.

“Our Empire will manage people in the end. We have every intention of building the biggest pop empire the world has ever seen. It’s an industry that can really destroy people’s lives. One of the main reasons we want to build an empire is that we see too many people doing it wrong. It’s not a puppet operation. We are honest as it happens.

The duo intend to have a record label of their own before the end of the year. to which they will be signing bands who write their own material. The basis of all this activity. though. is their own songwriting. They always write specifically for a group. and they reckon to have settled down with a performer’s character by the second hit.

When they write they begin by thinking of a title. then they write a song around it. It will confirm many people’s suspicions to find that their early songs were written on a four string guitar. although this has now given way to a smart Les Paul. In the end the question remains.

Is this deliberate commercialism degrading the standard of music?

Are the teenyboppers idols merely a con trick pulled off by some slick and talented operators who are prostituting their skills? Or is it true that Chinn and Chapman are writing classic rock and roll songs in the way that those other commercial – singles merchants Chuck Berry (who wrote his own) and Elvis Presley (who had them written for himby much the same sort of people as the Chinnichaps) did before them. Will future generations revive “Little Willie”. which has sold four million copies. or “Blockbuster”. as they now revive the early rockers. Will tomorrow’s kids rip-off the Chinnichap style and ideas as they have borrowed from their predecessors. A big hype or the authentic spirit of rock and roll? Only time will tell.

“The thing about hype is a little bit of an old-fashioned expression. The biggest hype ever was the Beatles. the only difference is that they could live up to it.”

Mike Chapman (b. 15 April 1947, Queensland, Australia) and Nicky Chinn (b. 16 May 1945, London, England) teamed up to form a songwriting partnership while the former was a member of the group Tangerine Peel and the latter a garage owner. With the encouragement of the Rak label boss, Mickie Most, they were later to compose a string of hits in the early ’70s for such acts as New World, Sweet, Mud, Suzi Quatro and Smokie. The duo became one of the most successful songwriting teams of the era and obtained a reputation in the UK that was only to be matched in the ’80s by the team of Stock, Aitken And Waterman. Mike Chapman emerged as an influential force in moulding Blondie for the pop market, providing production credit on such hits as Heart Of Glass, The Tide Is High, Sunday Girl, Atomic and Rapture. Chinn and Chapman inaugurated the Dreamland label in 1979 which folded two years later. Chapman later worked with Pat Benatar, Exile (Kiss You All Over, a US number 1—a Chinn/Chapman composition), Nick Gilder(Hot Child In The City, a US number 1), the Knack (My Sharona a US number 1), Patti Smith and Lita Ford. During this time the duo’s songwriting skills later earned them a US number 1 in 1982 with Mickey for Toni Basil.