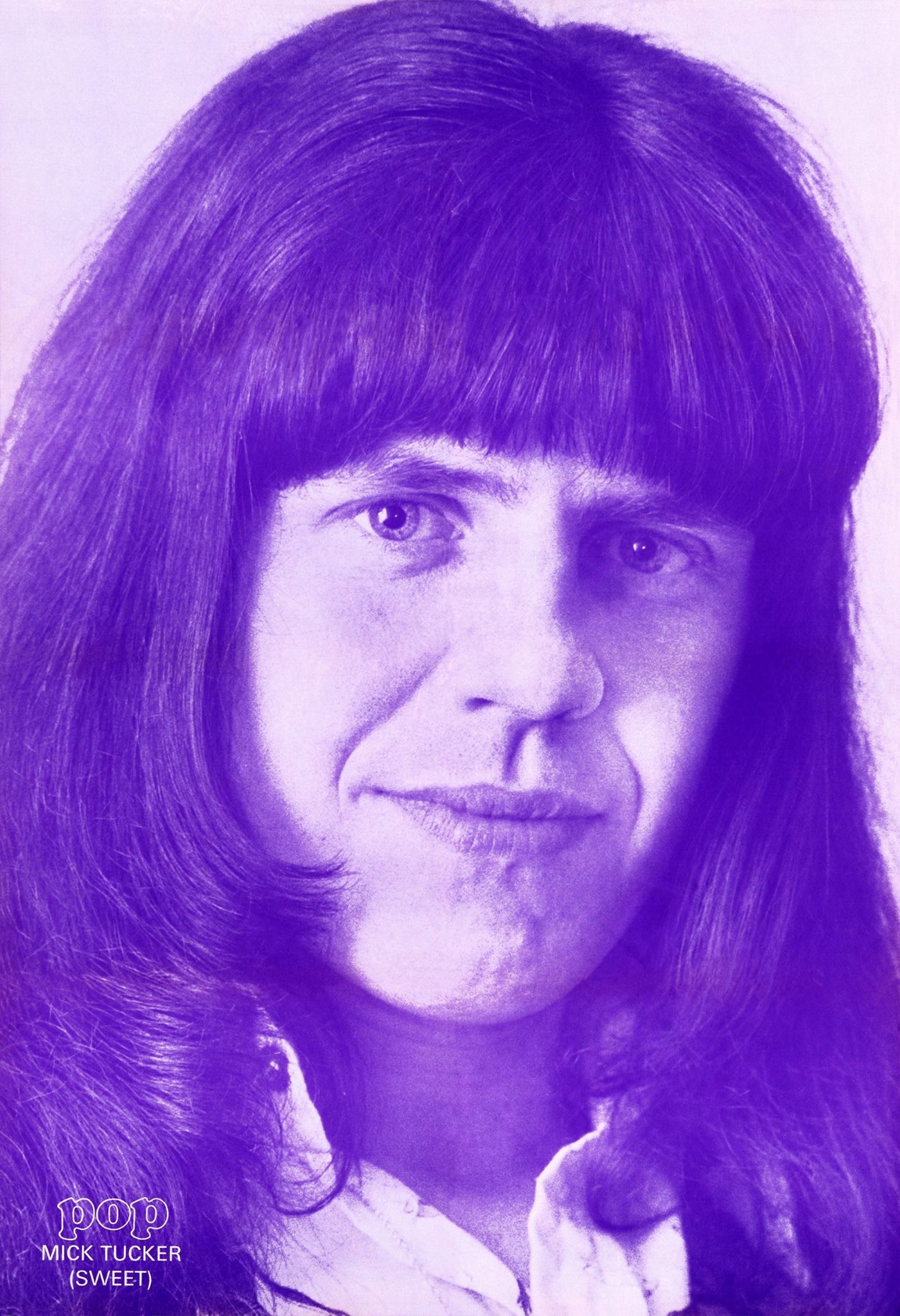 Mick died in hospital at 11.35am the 14th of February 2002. He had become unwell the Friday before and had informed friends he was going to see the doctor, but was then admitted to hospital on Saturday February 9th – a day we all remember, it being the anniversary of Brian’s death. Unfortunately Mick’s health went downhill and he passed away. With him were his family including his wife Janet, his daughter Ayston, niece Angela with her husband Martin.

Steve Priest: “I am afraid to have to inform everyone that Mick Tucker passed away about around midday today. It was from complications brought on by the leukemia he survived five years ago. Please respect his wife and family. We are all really devastated at his passing and will miss him dreadfully.”

Andy Scott: “Mick Tucker was the best drummer around in the 70’s. I played in the same band as him and was proud to do so. I feel extreme sadness therefore that he has now left us and my heart goes out to Janet and Ayston with their sad loss. Miss you Mick – and then there were two”.

As a boy, his first interest was drawing art. By fourteen he had changed to drums, influenced by Sandy Nelson, Buddy Rich, and Gene Krupa. Tucker’s father bought him a drum kit but only if he take’s drumming seriously. Hubert Tucker encouraged his son even getting him his first gig, sitting in for Brian Bennett of legendary British beat group the Shadows at a local workingman’s club. “He did well”. say’s Tucker’s wife, Janet, “If he had known who he was replacing, he would have been so scared!”

He then became a founding member of the band “Sweetshop” in January 1968 along with Steve Priest, Brian Connolly, and Frank Torpey, who was later replaced by Mick Stewart who was himself succeeded by Andy Scott. The name “Sweetshop” was a reflection of a sugary trend in Rock and Roll with bandnames like Marmalade, Strawberry Jam, Clockwork Orange, Tangerine Peel etc. and was shortened to “The Sweet” in 1968 as a name that instigates all of the sweetness of flower power.

Sweet extensively toured the US and had a strong following in America. On an objective view Mick Tucker was a very talented drummer with a range of complex rhythms who could have helped any band considerably. Steve Priest said of Tucker “He was the most underrated drummer that ever came out of England,”. ″He was the powerhouse of the band. He was technically marvelous. His timing was impeccable, and yet he had a lot of soul as well and he really felt what he was playing.” Tucker was able to improvise tirelessly and played a seemingly never-ending flow of creative solos. Tucker began and ended his drum solos with his rendition of Elmer Bernstein’s theme from the 1955 film The Man With the Golden Arm.

Tucker also used two projection screens that was above his drum riser. One screen played a videos of him playing the drums, simultaneously the other video showed him playing timpani. He would trade off solos with these videos, then came out front and play the timbales along with a fast Christmas-style recording. Just before the band would come back, he would play the Bernstein melody on tubular bells and timpani. Tucker tried to make sure his solos appealed to all of the audience. Tucker understood that a great performance consisting of great played technique and presentation in equal doses.

His style reminded of an early Keith Moon. Mick was one of the few double bass drummers that didn’t let the second bass drum get in the way of a swinging tune like ‘Ballroom Blitz.’ He had a great feel on double bass, played them effortlessly.

“And those guys knew how to have fun,” Cheap Trick drummer Bun Carlos once said. “We’d call them back on stage during our encores and jam on ‘Let It Rock.’ Mick would play my kit with the 26″ bass drum and just rock out with us. I’d hop up on the riser with him, playing guitar and watching him play. We had some great times together.”

Jack Irons of Red Hot Chili Peppers, Pearl Jam, and Wallflowers stated of Tucker, “Mick was a great drummer.” “He had that fluid, ’60s/’70s rock ‘n’ roll freedom. His drumming was super-tight and musical, technical, and rocking.”

Snowy Shaw, said of Tucker, “Mick’s tastefulness, precision, and strong signature put him at the very top of the list of drumming heroes I had when I was trying to master the profession,” he says. Technically, he was right up there with Ian Paice and John Bonham. Like a kid in a candy store, I devoured his selection of trademark tricks and licks, which he delivered so musically, and with conviction and grace like no one else. It may have been Peter Criss who first got me into drums, but it was Mick Tucker whose drumming most influenced me and who taught me how to play music.”

In 1997 Tucker had a bone marrow transplant from his brother to combat his leukemia. He had recurring infections however, before succumbing to the illness at the hospital in Welwyn Garden City in Hertfordshire, Southeast England. He was 54 years old when he died on 14 February 2002

Rest in peace Mick, you will always be in our hearts.