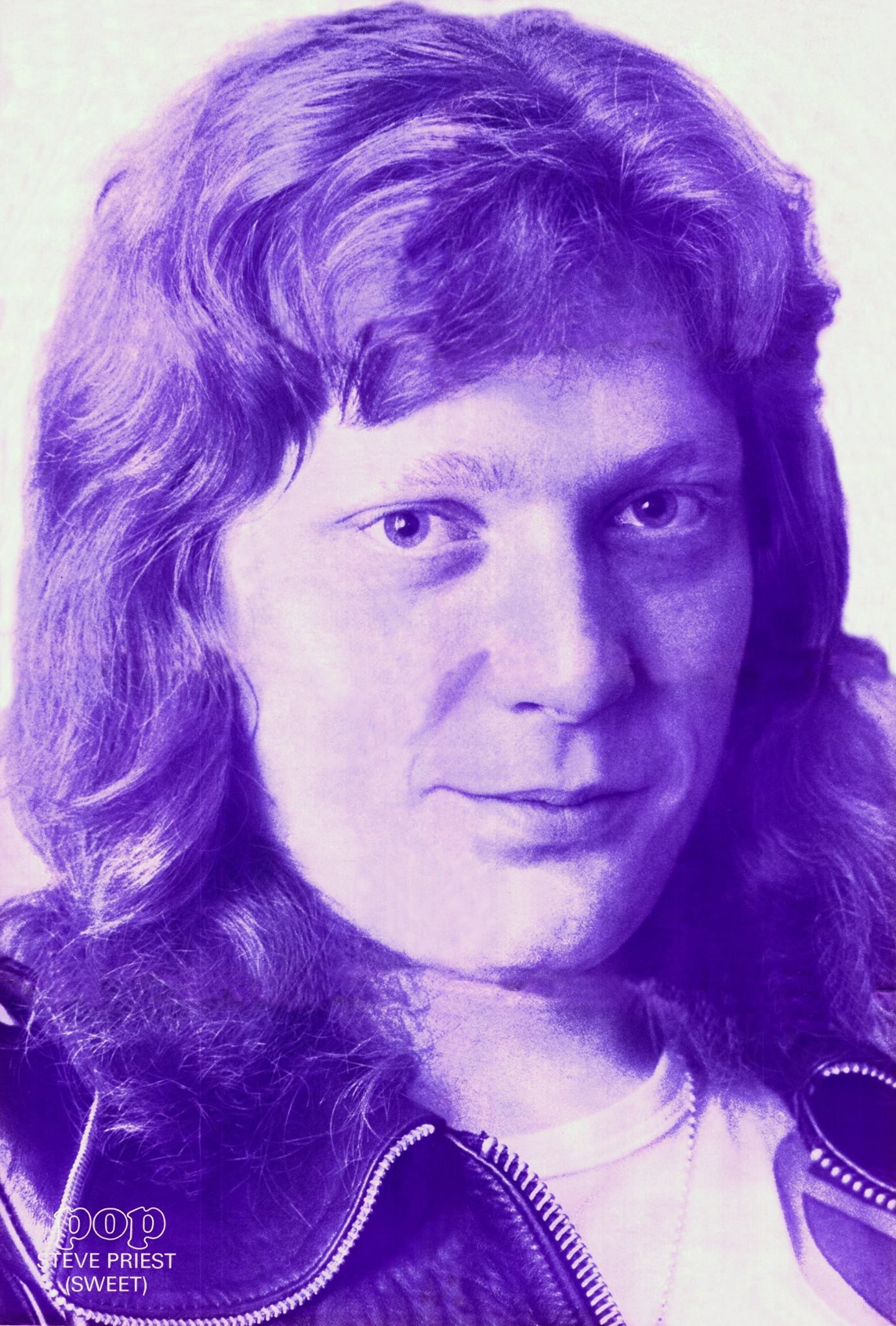 Stephen Norman Priest was born in Hayes, Middlesex on 23 February 1948

He was cartoonish – once warned by David Bowie to tone down his makeup – and ‘built like a hod-carrier’, but Priest’s camped-up performances defined glam rock and no member of the Sweet embodied low glam like bassist Steve Priest. Almost every low glam band had a member whose lot it was to take the excesses of their look one step further Slade’s self-styled super-yob Dave Hill; Mud’s Rob Davies, visibly uncomfortable in his dangly earrings and chiffon but Priest entered into the role with astonishing gusto. He slathered himself in so much slap that, in Priest’s telling, Bowie himself felt impelled to intervene backstage at Top of the Pops He said, ‘You know you really are putting much too much makeup on?’ and camped up his performances with a cartoonish relentlessness. In the 1974 TV documentary All That Glitters, Priest spots the camera as he exits a limousine and suddenly starts mincing, one hand on hip, wrists limp.

The effect wasn’t androgynous so much as deeply disconcerting: Priest was, in writer Julie Burchill’s memorable assessment, built like a hod-carrier and looked like a navvy who’d stolen all your makeup . His costumes, meanwhile, seemed to go beyond entertainment into a very proto-punk desire to shock: on the 1973 TOTP Christmas special, he mimed Block Buster dressed as, in his words, a gay Nazi , complete with swastika armband, uniform and full makeup: on another occasion, he took to the stage wearing a sequinned jumpsuit with the words FUCK YOU written on the back. We’re a nasty group, they were fond of telling journalists, mooting the unrealised idea for an album with the similarly punk-foreshadowing title We’re Revolting. Priest’s onstage persona impacted not just on the way the Sweet looked but on how they sounded. Songwriters Mike Chapman and Nicky Chinn and producer Phil Wainman packed their singles with special effects air-raid sirens, explosions, timpani, stamping feet, fans chanting We want Sweet! but the most striking were Priest’s hysterical vocal interjections.

Priest took to his role as the band peacock with great relish. “Everyone thought I was gay anyway, so I went, ‘OK, you think I’m gay, I’m going to act gay,’” he said in 2000, but it was often the case that his musicianship was overlooked.

“Excerpt from  The Guardian“

Steve left Sweet in 1982 after moving to the States where he lived his life with his own US based Sweet band the later years.