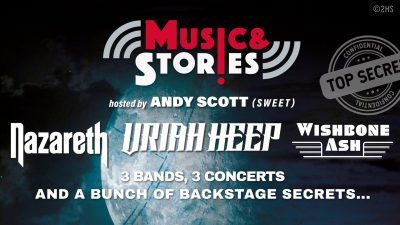 „Everything You Always Wanted to Know About Sex But Were Afraid to Ask “. The title of the Woody-Allen film is not the theme of this brand new, unprecedented event series, but it may apply a bit. The topic will naturally be mentioned during „Music & Stories“. After all, it’s the seasoned rock stars from Uriah Heep, Nazareth and Wishbone Ash who are going to reveal spicy, bizarre, funny and touching secrets in between their performances.
In 2020, the unveiling event celebrates its world premiere and tours through 14 German cities. Each band in this British triumvirate can look back on 50 years of unmatched careers next year.
150 years of rock expertise together on tour – fabulous sounds of a particularly spectacular kind are imminent. Hits, hits and more hits – all three legends will perform their own full sets!

The secret details that have been kept under lock and key until now are elicited from the famous musicians by none other than Andy Scott from Sweet. Icon Scott, who has been good friends with his famous colleagues for year, leads through the revealing evenings and pulls information on lucky underpants, backstage rituals and more out of the respective acts. Uriah Heep (classics like “Lady In Black”, “Stealin” and many more), Nazareth (evergreens like “Dream On”, “Hair Of The Dog” and many more), and Wishbone Ash (hits like “Lorelei”, “Persephone” and many more) will each play their own concerts and answer questions as an additional bonus. After they have been squeezed out humorously and entertainingly by Scott, the viewer feels as if he had already known the men behind the beloved music forever since.

The stories and sensations are given even more depth with pictures by “Bravo” renowned photographer Didi Zill, some of which have never been published before and which are going to be exhibited in the foyers of the respective venues in cooperation with Munich Rock Museum.
The view behind the scenes is granted by switching live to the stars in the backstage area. Due to the most diverse venues, every show is guaranteed to be different, exclusive and in its own way extraordinary and exciting.
Normally, you can only get this close with expensive VIP tickets. All you need here is an ordinary ticket to indulge in memories with three of the most famous classic rock icons of all time, rock as if there was no tomorrow and have fun with lots of insider information. Never before have insights been so humorous, harmonious, wonderful and profound on, behind and perhaps above and below the stage as in “Music & Stories”.
15 decadent decades full of hits and inside stories – epic! This show will go down in history!

By returning every year, “Music & Stories” will become a regular highlight in the calendar of events. Concerning the musical genre, everything is possible. It will be interesting to see what music and stories the future of the series holds in store.