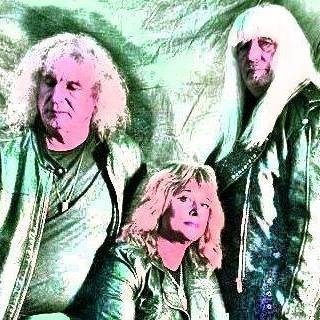 Quatro, Scott & Powell (QSP) is a joint venture founded in the very heart of glam rock, bringing together the combined forces of 3 legends of rock ‘n’ roll with Suzi Quatro on vocals and bass guitar, Andy Scott of The Sweet on vocals and guitar and Don Powell from Slade on drums. The 1st album is now available as a Deluxe Edition, featuring additional tracks which were not included on the original release.

All three have similar backgrounds and come from the same ballpark where they learned their craft, to coin a phrase “on the road.” Back then performing was the only way forward. They have huge respect for one another and approach our musicianship in the same way. They share an era and still continue to work and perform separately in concerts all over the world. After many enjoyable late night discussions it felt like the right time for them to come together to ‘pool’ their ideas. From the first drum beat, bass lick and guitar chord they knew they had something special. In the beginning it was fun returning to their roots by recording a few covers but eventually they started to write original songs which gave the project substance. They have created something they are all very proud of.