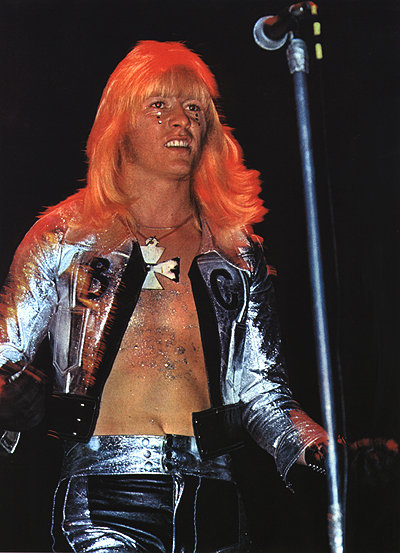 On 23rd February 1979 it was announced that Brian Connolly had left Sweet, to pursue a solo career. It came as quite a shock for many fans.

Connolly and the Sweet had just had a top ten single in the UK with ‘Love Is Like Oxygen’, their album Level Headed made the top sixty and they played a sell-out concert at the Hammersmith Odeon in London. So why did he decide to leave the group?

Manager David Walker issued a prepared statement to the press saying that the break up was due to musical differences. “Well, I would have, in fact, left two years before I did, but I just stuck out to tour – out of loyalty I suppose Brian added.

They had two pretty big tours of the States so I just stuck with it and did them.”, Connolly said to Derek Liddard when interviewed for the ‘On The Level’ fanzine in 1980.

“Musically, I would have left two years before.” Andy Scott was perhaps a little more caustic when interviewed for the Castle Hendring video The Sweet’s Ballroom Blitz. “When Brian was asked to leave Sweet in 1978, for whatever reason we gave at the time, we basically didn’t think he could cut it anymore, and that was due to the fact that the guy was drinking too much.”

Connolly however insisted that he “didn’t drink and I’ve never been into drugs”, when he was interviewed for Channel 4 documentary. “But I did a stupid thing, because a year after I left the group I started drinking. I was just thinking ‘What they’re going to say about me if they see me they’ve already said’.” Birmingham, Alabama During the 1978 US tour the Sweet opened a number of shows for Bob Seger. One of the gigs, in Birmingham, Alabama was especially important to the band. A number of executives from Capitol Records were in the audience to see the Sweet’s new style. No one had seen Brian all day, but he showed up in time for the gig. “It was an utter disaster from the outset. We were set on 78 but Brian was on 33 1/3.”, Steve Priest remembers in his autobiography Are You Ready Steve (page 192). It appears that Connolly, who swore he hadn’t been drinking, had taken some serious downers. “We managed to struggle through ‘Love Is Like Oxygen’, but we eventually had to call it a day and left the stage.”, Priest writes. Even though Scott wanted to throw Connolly out of the band then and there, the band decided that this was not the time to change lead singer. After a similar incident in Atlanta, Georgia a few gigs later the band had a serious meeting and Connolly promised to clean up his act. The rest of the tour went without any problems.

Clearwell Castle Late 1978 the Sweet returned to Clearwell Castle, in the west country of England, to write new songs for their next album, eventually named Cut Above The Rest. This was where they had written parts of their last album, Level Headed. The album ‘Love Is Like Oxygen’, their last chart success, was taken from. At Clearwell getting drunk every night became a habit, so was doing coke all day. “This was extra hard on Brian because he had a real drinking problem.”, Steve Priest writes in his book (page 195).”The problem was that he couldn’t hold his liquor. There were awful rows between Brian and Andy which almost came to blows.” “My voice was going” Connolly left Sweet during the recordings of the Cut Above The Rest. “We were progressing with the with the back tracks in the studio and the time was fast approaching for Brian to do his vocals”, Steve Priest writes in his autobiography on page 200.

Since Connolly and Andy Scott weren’t exactly the best of friends at the time the band decided that Mick Tucker should be behind the desk at Townhouse studios in Shepherd’s Bush, where the recordings were made, and help Brian. The day after Priest and Scott decided to see what progress had been made. “We were in for a big disappointment. Brian had managed to struggle through the first couple of lines of ‘That Girl’, and morale was terrible low.” After one week only one song was completed. “I didn’t understand why I couldn’t get the high notes, why my voice was going”, Brian recalls when interviewed for the Channel 4 documentary Don’t Leave Me This Way, in 1996. Former Sweet business manager David Walker claims that Scott, Priest and Tucker wanted Connolly to leave the group so bad, that they actually recorded the whole album in a key they knew he wouldn’t be able to sing in. “They told me I’d lost it, that I was no good anymore.” “It was the greatest act of creative sabotage I’ve ever seen.” David Walker said to Simon Kinnersley in an article published in The Mail on Sunday, February 4, 1996. True or not This story might, or might not be true.

But if you take a look at the Sweet hits you find that a lot of them are in E (the verses often starting with a B) with very high choruses (Ballroom Blitz, Hellraiser, Blockbuster, Teenage Rampage) which Brian could easily sing. ‘That Girl’ starts in A with the first chorus in D and the second in E. Beside ‘That Girl’ (sometimes called ‘Log One’) Connolly also put the lead vocals on ‘Play All Night’ before he left the Sweet. By the time the album was released the lyrics to both tracks had been, at least partially, re-written and the lead vocals was done by other members of the band. ‘That Girl’ was now called ‘Stay With Me’. The Connolly versions of the tracks appeared in 1995 on the Repertoire Records release Platinum Rare (REP 4487-WP). It is obvious that Connolly’s ‘Play All Night’ has been pitched down. The tempo is slower and the key is somewhere between an A and a G#. Maybe to help him hit the high notes. The version that can be heard on Cut Above The Rest is in A with the chorus in D and with a faster tempo.