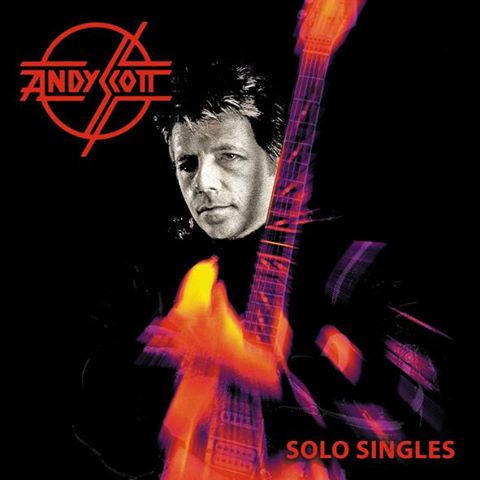 It all began with a song Andy had written called ‘Lady Starlight’, which was composed for inclusion on Sweet’s celebrated ‘Desolation Boulevard’ album. Producer Mike Chapman loved Andy’s vocal, but given that Brian Connolly was (at the time) the voice of Sweet, a decision was made to release it separately as an Andy Scott solo single. Andy was suspicious of this suggestion at the time, believing that there may be a hidden agenda or ulterior motive, but this proved to be unfounded…it was simply a great song that benefited from Andy’s melodic vocal style. It was a radio-play hit in the UK and successfully charted in Germany, Australia and South Africa, making Andy the only member of the original Sweet line-up to enjoy solo success.

The song was backed by another Andy Scott composition, ‘Where D’ya Go’. Andy takes up the story: “‘Where D’ya Go’, the b-side, was recorded at Kingsway Studios. Acoustic guitar, voice, no click, in other words, free-time. Louis Austin, Sonic Architect [engineer], suggested handclaps enhanced by the ‘lift shaft echo’ which became the tempo. When I played the song to Mick [Tucker], he urged me to let him put some drums on it and this brilliantly helped to disguise the free-time element. Getting the drums to tape took immense concentration from Mick and after a few takes, job done, He was sat behind the kit listening to playback with a towel covering his head, rather like a boxer in his corner. During all of this, Louis and I were in the control room, chatting and doodling on the guitar when suddenly as the track finished Mick yelled ‘bloody shut up!’ Apparently, instead of hearing his performance he had mainly heard our conversation and doodling but was too tired to say anything until the playback was over. We kept it in the final mix! I added a bass and an electric guitar and there you go.”

Following the split of the original Sweet line-up, Andy seized the opportunity to pick up where his solo career had left off. ‘Gotta See Jane’ was originally released on the Statik label. Although it was an Andy Scott single, it was released under the name ‘Ladders’ (a pun based upon a John Lennon throw-away remark that after the Beatles, he would form a band of that name). The song was originally a top twenty hit for Canadian musician (and co-songwriter) R. Dean Taylor. The track was recorded by Andy as a test run for the brand new Fleetwood Mobile recording studio. ‘Krugerrands’ was co-written by Andy and talented songwriter, Chris Bradford (formerly of the band Bardot) who successfully collaborated on a number of compositions featured here. The song saw the light of day on two separate occasions. First, a demo version appeared as the b-side to ‘Gotta See Jane’. It was later given a substantial make-over, this time released under Andy’s name. The lyrics to the song were clever, sarcastic and biting, striking a chord with the South African and Australian markets, where the single charted, giving Andy his second solo chart hit. Again, it was a radio-play hit in the UK but failed to make the top 40. ‘Face’ was the b-side to ‘Krugerrands’ and was also the second track off the ‘Krugerrands’ 12” single. ‘Krugermental’, an instrumental remix, appeared as the final track on the 12” version of the single. This caught the ear of singer Lene Lovich, who (with Andy’s blessing) took the track in its entirety and recorded a new lyric to it. Lene released the song under the title ‘Wonderland’.

‘Let Her Dance’ was Andy’s next single: “As with ‘Krugerrands’, I was trying to move away from the Sweet sound, combining dance music with rock music, much in the same way Quincy Jones had done with Michael Jackson. The programming on the track is primitive by modern standards.” The song was backed by ’Suck It And See’.

‘Invisible’ was the follow-up single, which again embraced the methods and technology of ‘Let Her Dance’. Curiously, it was released on the same day as the Alison Moyet single of the same name. This was backed by ‘Never Too Young’, the one and only song to feature Andy rapping, and in his own words: “…it’ll be the last!” ‘Ulysses’ was inspired by the famous mythological figure and the James Joyce novel of the same name. It was planned as a single release but never saw the light of day; nor did ‘Safety Net’, another potential single. The latter was an extremely catchy ‘loop recording’.

One song included here had a bumpy ride before making it on to this collection, as Andy explains: “I wrote ‘Be With You Soon’ in the early days of Sweet and it was ear-marked for inclusion on a compilation LP called ‘Funny How Sweet Co-Co Can Be’. Well, when it came for inclusion, the song never made the cut. However, the master tape vanished and the song was lost. Then one day, many years later, we received a call saying that it had turned up. A man had bought a box of goodies at a record fair and hidden amongst the odds and ends was my master tape. I met him in a pub and he willingly handed it back. However, much to my chagrin, someone at the time had simply marked the box with the word ‘duff’, which explained it omission.”

There are two versions of ‘Galaxy’ which was written by Andy as the theme to a Mike Mansfield television show which was fronted by Kenny Everett. Two pilots were made but it never got any further. So there you have it…

James McCarraher
With sincere thanks to Andy Scott and www.andyscott.info, Spring 2013