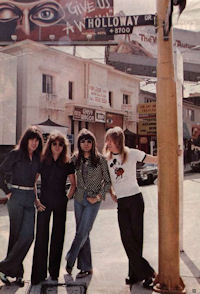 In America, however, the Sweet are still a singles act and still largely Chinn/Chapman. They left Bell when their contract expired in June and recently released their first Capital album, Desolation Boulevard, another compilation LP. Five of the ten tracks are Chinn/Chapman compositions. “Capital picked the songs for the album,” says Priest. “If we’d had our say, we’d have had all our own tracks on it, obviously. Which is not to say it’s a bum album.

We didn’t do too baldly, considering some of the ludicrous shit they wanted to put in there…we had a real fight on our hands. We’re way beyond most of that stuff now. ‘Ballroom Blitz’ is two years old, for example. Let’s not forget that. We couldn’t have put that out.” After playing one experimental gig at the sold-out Santa Monica Civic Auditorium, the Sweet have gone ahead and booked an extensive American tour to begin in January. Coinciding with the tour will be the worldwide release of a new, current Sweet album. “We’re trying not to compromise on this one. This is the step we’ve always wanted to take,” says Mick Tucker. “And if we don’t make it, I guess that’s it. Just another 15-hit wonder.”