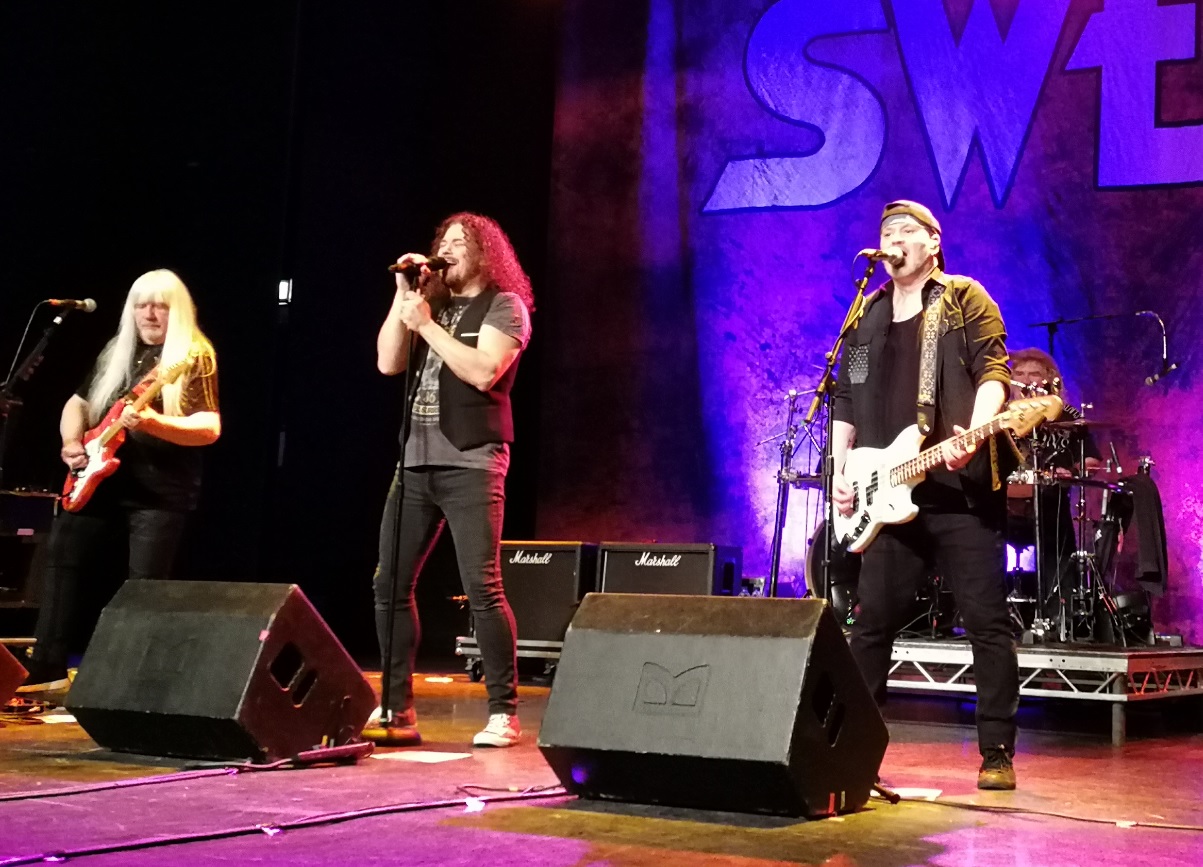 Sweet were most certainly part of my music staple diet when growing up in the early 70’s. The band were arguably the hottest ticket in town with a string of top ten records in the UK and Europe including ‘Blockbuster’, ‘Hellraiser’, ‘Ballroom Blitz’, ‘Teenage Rampage’, ‘Fox On The Run’ and ‘The Sixteens’.

Here was a glam rock band that were consistently very good and at the forefront of everything glam. Back in the day it was just like Blur versus Oasis with Sweet verses Slade. For me Sweet had the edge, although back in those days it was only singles that were of interest, as they were the be all and end all of everything.

The first half of the 1970’s was a fab time with acts such as T.Rex, David Bowie, Wizzard, Suzi Quatro and dare I mention him Gary Glitter and his Glitter Band. Glam Rock was a passing fad or phase and several acts gravitated towards the image for a year or so, before being whisked off somewhere else, such as hard hard or rock ‘n’ roll. I don’t really think that there was an overall ‘total unified glam sound’ (unlike say punk), it was a style. So you would end up with other acts being arguably considered as glam, when in fact they were just dipping their toes in. For instance, Mud, Alvin Stardust and Showadddywaddy. To me as a child of 10 Sweet were glam rock!

Here we are 50 years on and there’s still a buzz about ‘glam rock’, from those that were there and those who are just curious. Even ‘Fox On The Run’ has recently appeared on the ‘Guardians Of The Galaxy vol.2 soundtrack’. This bears fact as there are easily well over 700 people in attendance this evening at the De La Warr Pavilion. Sure there’s just one original members of the famous lineup of Brian Connolly, Andy Scott, Steve Priest and Mick Tucker, that being Andy Scott, but it’s the recent seventh incarnation of the band and tonight they are sounding great!

Upon entering the venue tonight, I was reasonably surprised that there was seating instead of just standing. Not a good idea methinks and I was right. After several songs some rebellious punters dared standing up and dancing in the isles. The young staff tried their best to curb those responsible, until Andy Scott yelled “leave them alone”. Which he apologised after the song and then swiftly demanded the whole 700+ souls get up out of their seats, which indeed they did and the party had started in earnest.

Even before the ‘new’ band took to the stage, some were shouting “We want Sweet”, culled from the beginning of ‘Teenage Rampage’, so clearly a party was going to be had.

On strolled five guys Andy Scott (lead guitar, vocals), Bruce Bisland (drums, vocals), Paul Manzi (lead vocals), Lee Small (bass) and Steve Mann (guitar, keyboards) and they launched into one of the biggies ‘Action’. Things were looking promising as they do sound not unlike the original recorded material. This was followed by another glam hit ‘New York Groove’, which I remember as a 1975 hit by north London’s Hello, which had followed the brilliant ‘Tell Him’ from the year before. The crowd hand clapping was heading into overdrive at this point. ‘Hell Raiser’ was next and sounded great. But this was the final date of the tour, so the new lineup had been getting in full flow by now.

Another hit lingered in the form of ‘The Six Teens’ and I was clearly enjoying this more than the recent Slade concert. But then after their performance of their number one Australian single which radio stations had plucked as an album track, the covering of Joey Dee & The Starliters ‘Peppermint Twist’, things took a heavy rock direction for a trio of tunes which wasn’t really my bag.

Events for me were rescued by the arrival of the fab ‘Teenage Rampage’ and for the following number ‘Wig-Wam Bam’, all of the crowd were up on their feet. Suddenly we had a ‘real’ gig on the go. ‘Wig-Wam Bam’ went straight into ‘Little Willy’ and everybody was up for it.

We were next served an unusual medley of latter chart hit ‘Love Is Like Oxygen’ with their cover of Emerson Lake & Palmer’s version of ‘Fanfare For The Common Man’. I certainly wouldn’t have put those two together before now.

The final three numbers were top drawer, ‘Fox On The Run’, ‘Blockbuster’ and ‘The Ballroom Blitz’. It was worth attending for these three songs alone! After the final number, Andy Scott appeared to cut his guitar strings as in to indicate, that’s another tour finished and you’re not getting any more tracks tonight! This was my first live encounter with the band and I certainly hope that it won’t be my last!

Timings as displayed on the venue’s tv screens